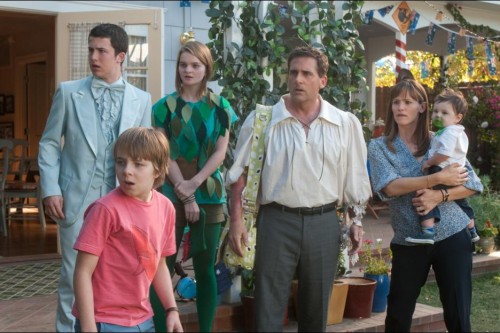 “Alexander and the Terrible, Horrible, No Good, Very Bad Day” opens at the end of the very bad day mentioned in the title and quickly introduces you to the main characters. You’re then transported back about 36 hours to the previous day, where the fun really begins for Alexander.

At this point in the movie I found myself thinking, when did Jennifer Garner become a movie mom, let along old enough to have a son who is a Junior in High School. But she pulls it off. She’s also an manager at a children’s book publishing company about to launch what could be a career making book deal. So there’s a little stress going around. 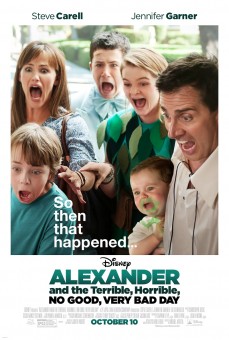 The Dad of the family, a wonderfully earnest and warmly funny, Steve Carell, has been unemployed for 6 months and playing the role of “Fa-ommy” (Father Mommy) taking the baby to play dates with the Moms and not really fitting in. He’s excited to get a job interview scheduled for the next day.

In fact, things are going pretty well for the whole family, the whole family except Alexander. That poor guy is having a horrible day. Not only is no one coming to his birthday party the next day (they’re all going to the cool kid’s party) he get gum stuck in his hair, sets the science lab on fire, and fails to impress the classmate he’d like to invite to his party.

Feeling sad for himself, Alexander makes himself a midnight sundae, lights a candle, and makes a wish that, just for a day, his family will know what it’s like to have a really bad day. And now the movie really gets started.

There are twin joys in the movie. Part one is watching all the very bad stuff happen to Alexandar’s family, but part two is seeing how the family supports each other even though the absolute worse things imaginable are happening.

As Alexander says in the movie’s crucial moment, being a family is about being there for each other no matter what life throws at you.

I went into Alexander and the very long movie title, expecting a movie aimed at making 6 to 10 year olds giggle until they peed their pants. And there was that level of silly humor. But there was also a lot of humor directly squarely at the parents of said 6 to 10 year old.

I really can’t endorse this movie enough for families of any shape or size. I give it four out of five flaming pirate blouses.