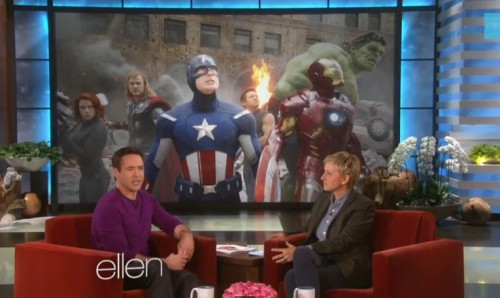 Ellen DeGeneres had Robert Downey Jr. on her show yesterday and she was able to extract an answer to one of the Marvel Cinematic Universe’s most interesting questions… will there be any more Iron Man movies staring Robert as Tony Stark? Much to every one’s surprise, the answer was yes. The two sides are in negotiations for Iron Man 4.

Can’t really state it any more plainly than this:

Downey Jr. claimed an amazing 7% of the profits for appearing in the last Avengers movie (earning him something north of $65 Million for appearing in the film.) So you can imagine the negotiations are fairly high stakes. Still, if he’s willing to take a lower salary up front and only share in the profits, that seems fair to me.

RDJ and the rest of the Avengers have already completed filming “Avengers: Age of Ultron” which means we won’t have to wait too long to see Iron Man again. But the question is where will Marvel slot in the 4th Iron Man film? They announced a pretty robust list of films earlier this year. (although not all titles were filled in).

Finally, not many men besides Donny Osmond can pull off a purple sweater like that… maybe Downey Jr. can bring velour back too!

Are you excited about Robert reprising his role as Tony Stark in at least one more Iron Man movie? What would you like to see in the movie?