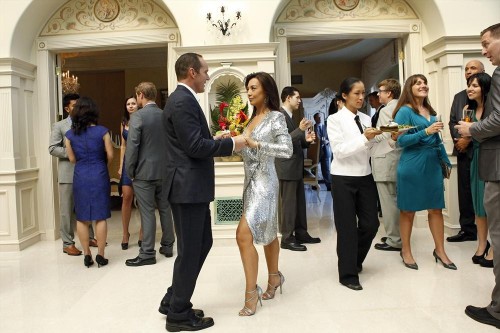 “Coulson and his team race against Hydra to get to Donnie Gill – a dangerous gifted with the ability to freeze objects – while Simmons is caught in the crossfire.”

It looks like another packed episode this week. ABC’s official synopsis talks about the return of Donnie Gill (aka, Blizzard, in the comics) but the two video clips that have been released show tension elsewhere for our team as well.

Skye and Ward have another face off as Ward tries to justify his actions. We also get the first hints of who his family might be (here’s another hint: they’ve just cast his brother).

The big reveal in the tease for this week’s episode is that Simmons has been working for Hydra. TV Guide has a clip of Simmons as she starts her day and reveals her new job. They seem to be playing this “betrayal” up quite a bit and I think that there is more to Simmons job at Hydra than what we’re being led to believe right now.

What do you think of Season 2 so far?