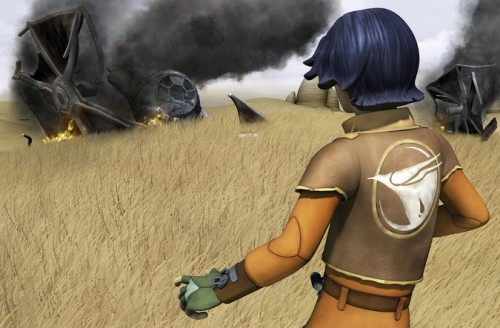 The first Star Wars TV project to come from Disney after its acquisition of Lucasfilm is the animated TV sereis “Star Wars Rebels.” Don’t expect it to stray too far from the winning formula George Lucas found with his franchise though. There will be a young protagonist who finds his master, then sets out to discover who he is, overcome challenges, and become a better human. The Hero-cycle.

The one hour premiere will air tonight on The Disney Channel before moving to Disney XD on Oct 13th for a regular Monday night half-hour slot.

The style is unmistakably Star Wars and yet, it is also reminiscent of Japanese anime. You’ll recognize a bunch of homages to “Star Wars IV: A New Hope,” the film that started it all. In fact, “Rebels” takes place just before that that movie as the rebellion struggles to get its feet underneath it.

The creators of this series clearly hope it will rekindle some of the nostalgia that older fans feel for the Star Wars franchise while also introducing a new generation to the universe of Star Wars. With a new series of movies coming to the screen starting in 2015, I hope the force is with them. I’m sure Disney does too.

Be sure to set your DVR’s to stun tonight then come back to discuss what you think of this new series.