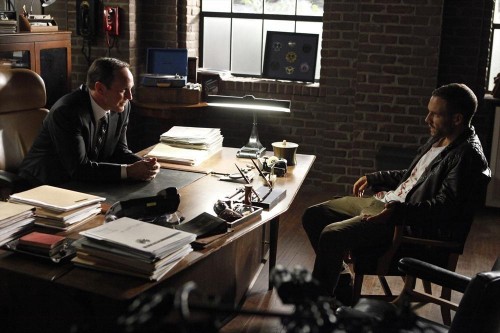 Starting right where last weeks episode left off, Agent May comes upon the overturned car, allows Hunter to get out of the car, then goes after Creel. Hunter is immediately arrested by Talbot’s men while May tails the Absorbing Man to a restaurant.

“Heavy is the Head” continues the tread of new and changing relationships from the first episode.

Hunter is a mercenary, therefore his loyalty is in question, He even questions it himself after the death of the women he loved.

Fitz is still coping with the loss of Simmons and his quick intellect, but he may have found a new partner in Mac, the only one treats him like a real person instead of fragile and broken. I really enjoyed watching the two of them interact.

Skye is still wrestling with the growing distance between her and Coulson. She knows that he is hiding something from her. May, however, is ever the protector, protecting Coulson’s secret from Skye and making sure Coulson indulges in his obsession as safely as possible.

Raina is back and still on a quest for enlightenment. This time she thinks that the obelisk will give it to her. She recovers it at the end of the episode and returns it to a man who turns out to be Skye’s father. Not much else is known about him or the obelisk, except that it apparently let Raina live after touching it.

The episode ends with Creel finally out of the picture (for now) thanks, in large part, due to Fitz and an uneasy alliance being made between Talbot and Coulson. I like that Fitz still plays a role on the team. He isn’t just there because everyone feels sorry for him.

I am really interested in seeing where this season is headed, especially after watching the below promo for next weeks episode. What about you?