When we left our team last Spring, S.H.I.E.L.D. was all but destroyed. Coulson and his team were the remnant and charged with building the organization back up from the ground. They were also still reeling from the discovery that one of their own, Ward, was a traitor and another, Fitz, had been badly injured. We, the audience, also got our first glimpse of Skye’s mysterious father and Coulson’s mysterious wall writings.

Season Two will be about rebuilding S.H.I.E.L.D. and Director Coulson will need all the help he can get, including new agents like Isabelle Hartley (played by Lucy Lawless) and old agents like Peggy Carter. Coulson, being the fan of history that he is, wants to learn all that he can. I think this is a great way to bring Haley Atwell into the show as a guest star. It’s like they’re setting up for a spin off show or something…. 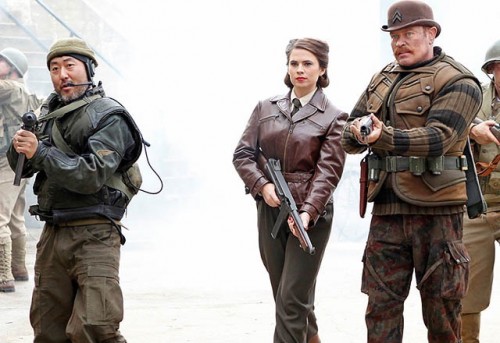 Marvel has released a clip from the first episode. In it, we get to see both Agent Hartley as well as “Crusher” Creel, known as the Absorbing Man in the comics. Creel has the ability to absorb the properties of anything he touches and the clip hints at what a formidable foe he will

Will you be tuning in Tuesday night to see the return of Coulson and his team?