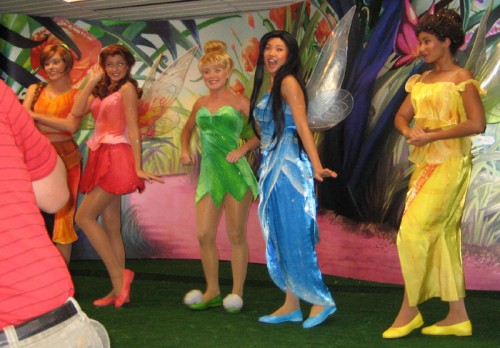 Ever wonder what the cast members who play Walk Around Princess characters in the parks experience on a day to day basis? One former cast member took to Reddit for an Ask Me Anything (AMA) session. And it went a little weird.

Kristen Sotakoun (who I assume is no longer working as either Mulan, Pocahontas, or Silvermist the fairy at Walt Disney World) actually had a really good attitude about meeting the creepy underside 13 year old side of the internet as you can see on her blog post summing up the experience.

Frankly, I’m just happy this wasn’t a polemic about the creepy bloggers and youtubers who show up without kids in tow and ask questions in character. Now that I would know anything about that. :)

If you’re brave enough, you can go read the original AMA, but be warned, like a lot of things on Reddit, it’s not always safe for the kiddies or for maintaining your illusions of what goes on behind the scenes to make all that pixie dust and magic.

But it also contains some less dangerous stuff, like how much training they get:

You have two days of training per face character you’re given. Day 1 is watching the movie, learning how to walk, talk, & act, & day 2 is meet & greets with guests. I think there may be an additional day for accents ex. Alice in Wonderland & Mary Poppins, but none of my three face roles had an accents, so I’m not sure.

and how they come up with the one liners and dialog they user when greeting guests:

People ask very similar questions throughout the day. & when you do 5+ hours a day of talking to guests for 5-7 days a week, you have your quick little one-liners ready.

Also, most kids are shy when they come up to meet you. In all honesty, I’ve had thousands of conversations with people where I’m the only one talking. I’m proud of that.

previousDisney Store to add Apple Pay NFC mobile payments
nextInstapic: I think that woman is taking a picture of me.