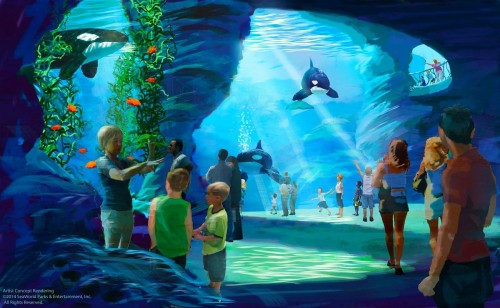 I’m a bit surprised, but not totally shocked, by SeaWorld’s decision not to appeal the court ruling enforcing OSHA’s finding that it was unsafe to have employees (aka trainers) in the water with Killer Whales (aka big animals with a remote risk of danger).

I expected SeaWorld to take the position that it will keep trainers out of the water during the performances, but that “in water” sessions were essential for training. However, it looks like the park has decided to tackle the issue another way.

That way was the recently announced Blue World project that will expand the Killer Whale habitats in all three parks and provide a variety of enrichment activities for the animals, including fast water current for them to exercise in. There are other killer whale facilities around the globe that don’t involve in-water training, so it can be done.

The decision was revealed in a recent regulatory filing. The park also released this statement:

“The safety of our staff and the welfare of our animals are SeaWorld’s highest priorities, and since February 2010 we have made significant safety improvements. … We are focused on the implementation of those improvements moving forward. As such, we opted not to pursue further appeal of the court’s decision, which was based on how we were conducting our killer whale program prior to February 2010.”

More details on the decision in the Orlando Sentinel.

After the Killer Whale habitats are expanded, I’d like to see the same thing happen for the Dolphins and Pilot Whales. How about you?