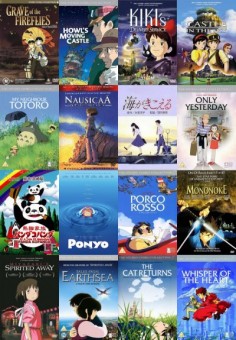 Sad news from Japan. Studio Ghibli has announced that with the completion of their most recent film, they will be closing the animation department, at least temporarily, and become a smaller studio focused on their existing properties. They don’t rule out making new films in the future, but it will probably be via third parties. This “brief pause” was announced by Toshio Suzuki the studio’s general manager and longtime producer for Hayao Miyazaki (basically the Ed Catmull to Pixar’s John Lasseter)

Disney and Studio Ghibli have had a great partnership over the years with Disney paying to have the films dubbed into English and then distributed internationally. In 2011 a firm called GKIDS acquired those rights.

The potential “final” film from Studio Ghibli is “When Marnie Was There.” Based on a novel of the same name from Joan G. Robinson, the movie follows Anna, who is recuperating from an illness, as she meets the mysterious Marnie, a girl from her dreams. The film is already out in Japan, but there is no word yet on a U.S. release date.

The previous film from Studio Ghibli, “The Tale of Princess Kaguya,” had a very poor reception at the box office and no US run yet (GKIDS has the rights for it and is planning a US release this fall). Rumors have been going around that the studio would take a break after Marnie was released, but I would not shocked to hear that it is considering ending animation all together.

Unlike The Walt Disney Studios, most animation studios don’t survive the death or retirement of their creative leader. Hayao Miyazaki, who founded and led Studio Ghibli retired from animation after his final feature film, “The Wind Rises.” I haven’t seen it, but I hear it was an amazing artistic endeavor.

The world of animation has changed dramatically, new technology makes it easier for smaller studios to get in the game, but at the same time, makes it difficult for small studios to survive a few disappointing box office numbers.

What do you hope happens at Studio Ghibli?