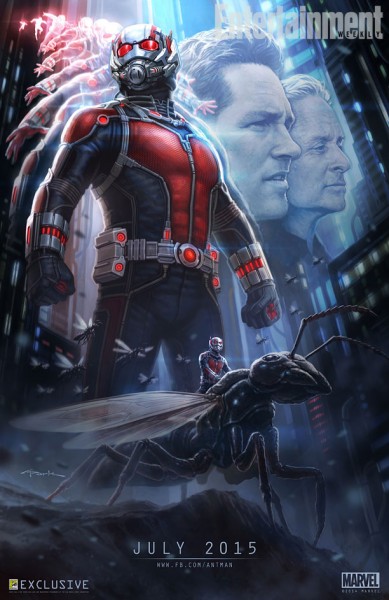 There was a lot more to see and do at SDCC with Marvel than just the big suits of The Avengers. Minor films like Ant-Man got their due too. We were treated to an early concept poster for the film (above) and some exciting casting news.

Evangeline Lilly and Corey Stoll will join the Marvel Cinematic Universe as Hope Pym, the daughter of Hank Pym, and Darren Cross, a.k.a. Yellowjacket the primary antagonist, respectively, in Marvel’s “Ant-Man.”

“We’ve been fans of Evangeline for years, and couldn’t be more pleased that she’s agreed to join us on Ant-Man’s journey to the big screen,” Marvel’s Kevin Feige explained. “We look forward to audiences learning more about her character when she joins forces with Hank Pym and Scott Lang in 2015.

“Corey brings depth to every role he plays,” continued Feige. “As a major part of the Ant-Man ensemble, we all wanted an actor who could be both cunning and sympathetic, and help create a character as dynamic as Marvel’s best antagonists.”

For San Diego Comic Con the director and some of the cast of “Ant-Man” took place in a brief Q&A after their signing session:

Alas, they haven’t started principle photography yet. So at this point everything is still subject to chance. But they’d better get a move on as Marvel’s “Ant-Man” is scheduled to open at theaters on July 17, 2015! That’s Disneyland’s 60th birthday. Think about the cross-promotion potential there! They could bring back Adventure Through Inner Space for one year only! “Now you’re being shrunk to the size of an Ant, just like Scott Lang…”

previousMarvel Set to Release Three Versions of Guardians of the Galaxy Soundtrack
nextZetus Lapetus…Zenon is 15!