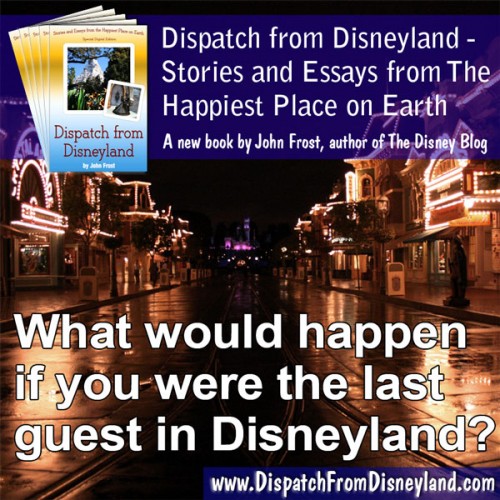 We’ll let the historians debate whether opening day for Disneyland was July 17th, when the live TV broadcast and dedication was made, or July 18th, when the first public ticket was admitted through the gate. Either way, it’s a pretty remarkable thing that Walt’s little idea for a park that both parents and children could enjoy together, would survive for nearly 60 years and become an icon for themed family entertainment and a destination for hundreds of millions of happy guests from around the globe.

To celebrate Disneyland’s Birthday, I am giving my readers an excerpt from “Dispatch From Disneyland,” my book celebrating Walt’s Park. The story “Alone in the Park” is this author’s attempt to share one of the magical moments I experienced while at the park on a rainy day.

Download it for free from Dropbox. It will be available through the end of the month.

Now, we can look forward to Disneyland’s 60th anniversary next year. Recently the park has shied away from doing anything big on the fives, but sometimes they roll out the carpet for some cool stuff on the tens. If you were in charge of Disneyland, what sort of promotion would have to celebrate the park’s big 6-0?