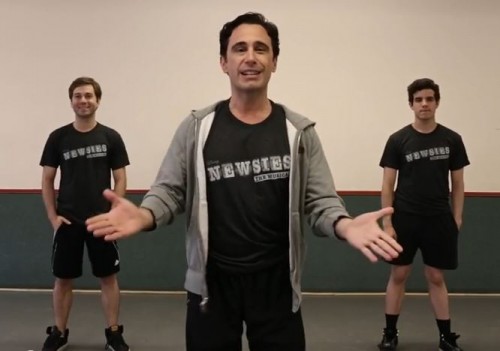 It’s not every day that the First Lady of the United States, Michelle Obama endorses your work, but Christopher Gattelli, who choreographed the dances for Disney’s Newsies on Broadway, has now had that honor. Gattelli and the cast from Newsies have released a “Seize The Day’ dance tutorial to help kids stay active through fun activities, such as Dance.

The tutorial features slightly less acrobatic moves, so it can be accomplished by kids of nearly every skill level. You will need a good size area of smooth floors and a newspaper to shred for this dance.

“Get Up and Go” promotes fun ways that kids can lead healthier lifestyles through dance, inspired by the Disney’s Broadway shows and award winning choreography. The program launched in December 2013 and is currently offered to schools participating in Disney Musicals in Schools, Disney Theatrical Group’s outreach initiative that builds sustainable theatre programs in New York City schools. The first phase of the program features the Tony Award-winning choreography from Disney’s Newsies. Cast members have been visiting participating schools, leading students in conversations about making healthy food choices, and teaching actual dance sequences from the show.

“Get Up and Go” will expand nationally with the onset of the recently announced Newsies National Tour in the fall of 2014. Programs in select cities will be announced at a later date. The program will expand to include sessions from The Lion King and Aladdin in 2015.