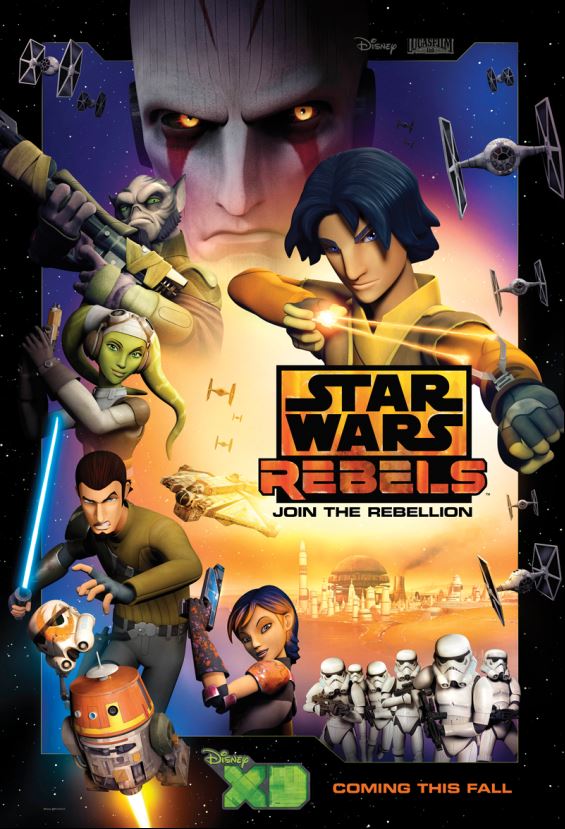 Disney is betting big on Star Wars Rebels, a new animated series coming to Disney Channel and Disney XD, to fill the gap between now and the debut of Star Wars Episode VII. Today they released a new “collage” poster (above) and details of an upcoming panel at Sand Diego Comic-Com.

I don’t know if Chopper, the new droid unit from Star Wars Rebels will make it to SDCC. But it’s now possible. The same team at Lucasfilm who has been building new R2D2 units for the upcoming feature film trilogy, has built a working remote control version of the spirited and often grumpy droid from the animated series. They even released a cool behind the scenes video of how they built it (keep an eye out for a cameo by Wall-e):

“Star Wars Rebels continues the epic tradition of the legendary Star Wars saga with all-new exciting, action-packed adventures. It is a dark time in the galaxy, as the evil Galactic Empire tightens its grip of power from world to world. As the series begins, Imperial forces have occupied a remote planet, ruling with an iron fist and ruining the lives of its people. The clever and motley crew of the starship Ghost is amongst a select few who are brave enough to stand against the Empire. Together, this ragtag group will face threatening new villains, encounter colorful adversaries, embark on thrilling adventures and become heroes with the power to ignite a rebellion.”

Star Wars Rebels is coming to The Disney Channel this fall in a 1-hour special, then regular episodes will appear on Disney XD.