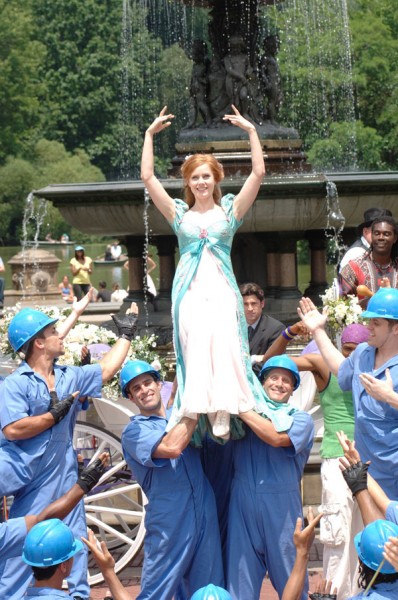 If you recall how Disney’s Enchanted ended, Giselle (Amy Adams) ended up with her prince (Patrick Dempsey) and a successful career in fashion in the real world, while Adele Dazeem (played by Idina Menzel (I’m joking)) got her man in the animated one. The whole concept of a live action film with hand drawn animation segments was great. It was nice that the film didn’t take itself too seriously either.

The film got generally good marks from critics, but unfortunately, the 2007 theatrical release never really won over audiences. It ended up 15th for the year with $340 million worldwide. That said, there were rumors in 2010 and 2011 that Disney wanted another crack at self-parody with a sequel. Amy Adams and James Marsden where asked if they were on board, and they said yes at the time and that was the last we heard of those plans.

Fast forward to 2014 and Disney has just hired a screenwriter to work on a script for Enchanted 2. Deadline reports that Anne Fletcher is directing, J. David Stem and David N. Weiss will be working on the script, and Barry Josephson and Barry Sonnenfeld will return as producers. No word on which, if any, cast members will be returning.

In the last 7 years Disney has really turned the idea of what it means to be a Disney Princess upside down, a process that really started with the original Enchanted’s take on the modern fairy tale. It will be interesting to see where Enchanted 2 goes from here.