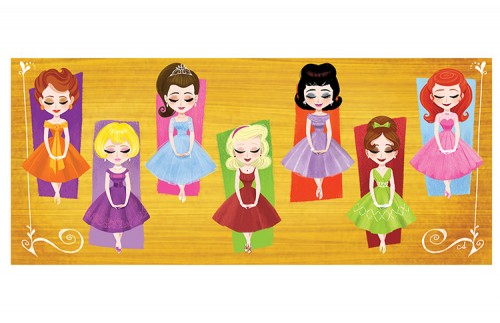 There are a few Disney fan art creators who I feel Disney should scoop up immediately and mass produce their art. Amy Mebberson, of Pocket Princesses comic strip fame, is one of them. As it turns out, Mebberson actually does work for Disney. They’re not creating Pocket Princess vinylmation dolls at the moment, but they are doing the next best thing. She’ll be the artist in residence July 4 – July 20 at the WonderGround Gallery in Anaheim’s Downtown Disney District. Look for appearances on July 4-6, 11-13, 18 – 20 from 6-10p.m. each night.

In just over a week, I’ll be sitting HERE PAINTING NEAT THINGS! Gonna be SO fun :) #WondergroundGallery pic.twitter.com/PYngzXDPZB

I hope you’ll stop by and say hi to her for me when she’s at WonderGround.

Artist Bio and sample Pocket Princesses illustration below the jump:

In her Pocket Princesses comic strip, Membberson imagines all the Disney Princesses living together. Of course Hijinks ensue…

Amy Mebberson is an Australian comic artist and illustrator who has spent most of her career with The Walt Disney Company. Amy started as an inbetweener and assistant animator at Walt Disney Animation Australia, before moving to the United States and beginning a career in comics and storybooks. She has worked as an artist for various Disney properties and related subsidiaries as well as Boom! Studios and Little Brown & Co. Amy has also produced a selection of Disney fine art for Acme Archives and was one of the artists featured during the opening of WonderGround Gallery. An active illustrator for other notable entertainment licensors, Amy currently draws My Little Pony comics for IDW Publishing and the ever-popular fan-comic ‘Pocket Princesses.’ Amy currently lives in Southern California and is known to spend much of her time at the Disneyland® Resort. You can check out her Tumblr blog for more examples of her work.