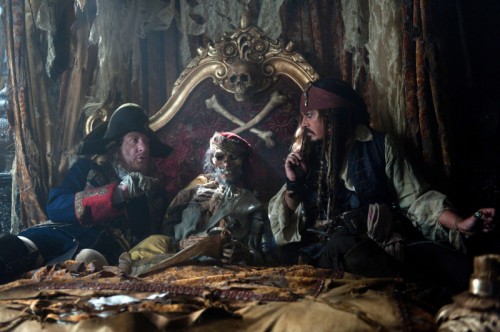 There’s a good chance that Johnny Depp will be back as Captain Jack Sparrow in the 5th installment of the Pirates of the Caribbean movies. I don’t see how they could continue the series without him now that they’ve abandoned the Will Turner storyline.

The movie was originally supposed to open in 2015, but now we learn that production will just be getting started in the new year. It is expected to bow mid-summer under the title: Pirates of the Caribbean: Dead Men Tell No Tales.

After the disaster that was The Lone Ranger, Disney and producer Jerry Bruckheimer dissolved their working arrangement, but everyone will be back in the boat for this sequel. They just make too much money for all involved.

In addition to Johnny Depp, it’s expected that Geoffrey Rush and Penelope Cruz will return along with many of the regular shipmates. Ghosts and the Bermuda Triangle are rumored as plot points and screenwriter Jeff Nathanson (Rush Hour 2) is writing the screenplay with Joachim Ronning and Espen Sandberg (Kon-Tiki) directing.

Johnny Depp’s star value has dropped after “The Lone Ranger” and “Transcendence” both tanked at the box office. Depp still is working with Disney on their Alice in Wonderland sequel and has reportedly signed for Pirates 5 & 6 already.

The question now is can all the other ducks get lined up in a row to fit into one of the open weekends in a crowded summer 2016 and not conflict with any Marvel or Star Wars releases.

Are you looking forward to more from Johnny Depp as Captain Jack?