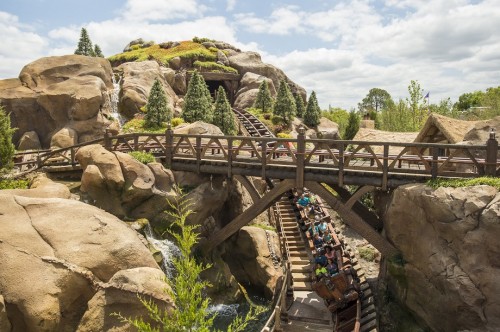 We finally got the entire Frost family on Seven Dwarfs Mine Train together. Of course, I had to break out the camera and record the moment resulting in this on ride POV video taken from the back row. There is a bit of an extended moment in the middle as we were stopped on the 2nd lift hill.

This is a fantastic addition to the Magic Kingdom. It’s fun, has great character, is family friendly. If only it were it bit longer, it would be perfect. But the first of its kind swinging motion and fun animatronic surprises make it a new favorite of mine. Definitely try to reserve a Fastpass+ for the roller coaster when you’re planning your visit. If not, you an still enjoy the interactive elements of the queue, but understand that it will move very slowly due to the Fastpass+ traffic.

Seven Dwarfs Mine Train was the final jewel in the crown that is new Fantasyland. I do hear rumors of some blue sky attempts to fit a Frozen themed attraction somewhere in Fantasyland, but conventional wisdom has that coming to Norway at EPCOT instead. Really, Magic Kingdom needs to focus on Tomorrowland now.

What would you like to see next at the Magic Kingdom?