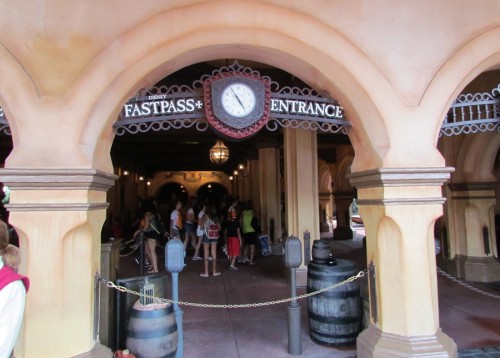 MyMagic+ and Fastpass+ has been turned on for everyone at Walt Disney World since February 2014. It has certainly changed the way we experience the parks as a local and I’ve noticed a subtle shift in attraction patterns for the larger group of visiting tourists as well. Rides that never had waits before are now experiencing longer times and some of the park’s more popular rides are actually posting shorter wait times on average. As time goes on and more families become aware of Fastpass+ prior to arriving at the park, I expect this to change even further.

But you don’t have to rely solely on my powers of observation, the fine folks at TouringPlans.com broke out the spreadsheets and crunched the numbers to find out, with a 95% certainty, exactly which attractions went up in wait time and when went down.

Attractions with high capacity, like Pirates of the Caribbean, Spaceship Earth, and Haunted Mansion have their waits extended by up to 10 minutes due to the way Fastpass+ distributes guests by creating artificial scarcity. Attractions that previously were very popular must-ride attractions, like Space Mountain, Test Track, and Toy Story Mania are seeing shorter waits, some nearly 15 minutes less on average. The difficulty in getting repeat Fastpasses for these E-Ticket rides means people are riding them less.

We discussed before how Fastpass+ is like the return of the ticket book system. You an only get so many E-Ticket rides in, and Fastpass+ pushes you to experience more of the lower tier attractions. Effectively spreading out the demand for each attraction. I think this will eventually benefit the park overall because it will be easier to justify the budget for an upgrade or new C or D ticket ride if Fastpass+ will ensure it gets seen by more guests.

There is some speculation that the switch to Guest Access Cards has also helped reduce waits at some of the more popular attractions. Disney could also be playing games with capacity, running the attractions at close to full capacity for more hours of the day. It costs them more in labor, but makes Fastpass+ seem like a success. I’d love to have a look at Disney’s own numbers.