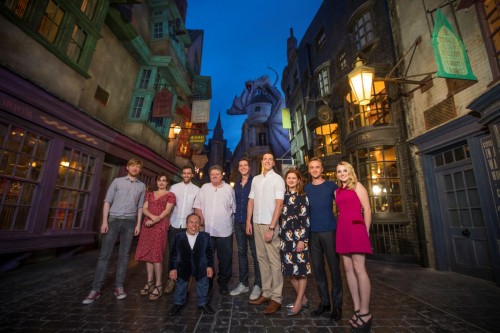 I’ve been doing my best to avoid major spoilers to the new Wizarding World of Harry Potter area at Universal Studios Florida. Not every blog can be invited to the press events and for some reason, Universal didn’t invite us to last week’s mega-preview event. So, since my first chance to really go in depth into the new area is at least a couple weeks away, I wanted to keep as much of it as surprise as possible.

That said, I did watch this nice little video package with highlights from the celebrity parts of the event and a few brief peaks inside the new Diagon Alley area. If you haven’t been diving in to every detail of the new areas, this is a great introduction:

From everything I’ve heard, this new expansion is even more immersive than the first, more entralling with moments from the movies taking place all around you as you walk through. There is only one major new attraction, but the train between the parks also counts and so does the general experience of being inside the world of Harry Potter.

Are you planning a visit to Diagon Alley? If so, will you head out on July 8th, it’s grand opening, or wait until the crowds have died down a bit?