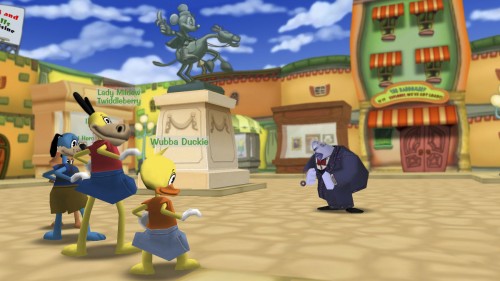 In 2012 fans of Disney’s Virtual Magic Kingdom were teased with the idea of resurrecting that much beloved MMO. Instead, they got VMKRevisited, a flash recreation of the environment, but no game-play. Alas, VMK was only the first Disney themed MMO to close. Disney eventually closed them all including: Pixie Hollow, Pirates, and ToonTown Online.

Earlier this month, a fan-led volunteer effort to recreate ToonTown MMO came to fruition. It’s not exactly the same, but ToonTown Rewritten does have MMO game-play and a very similar look and feel. It just doesn’t have Disney characters like Donald Duck or Mickey Mouse.

A story in Bloomberg news talks with some of the team who helped bring the game back to life and explores some of the ramifications for Disney and the re-incarnated game.

“Whether to allow Toontown Rewritten to continue is a tricky decision for Disney. If the company lets Ziolkowski and his collaborators keep going, it builds goodwill with fans. On the other hand, Disney may want to sell the content in the future, and the company could suffer reputational damage if something bad happens to players online…”

What do you think Disney should do?