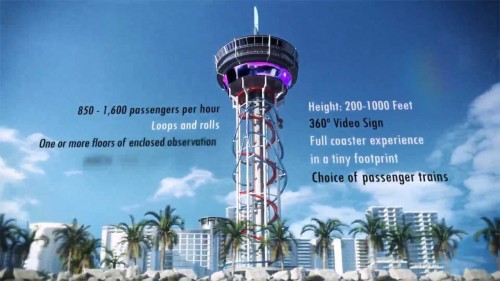 The buzz that started at last year’s IAAPA convention has solidified into solid evidence that the first Polercoaster, a 570 tower with a coaster built into it, will be coming to Central Florida soon. Here’s a video with concept art from an earlier version of the attraction. The new one will look somewhat different.

According to this story on local news station WESH, all signs point to the tower going up somewhere on or near International Drive and Sand Lake. As anyone who has tried to drive up and down International Drive can tell you, traffic is already a problem there. So I hope the new development comes with solutions to traffic problems.

Word is that further details will be forthcoming later this week.