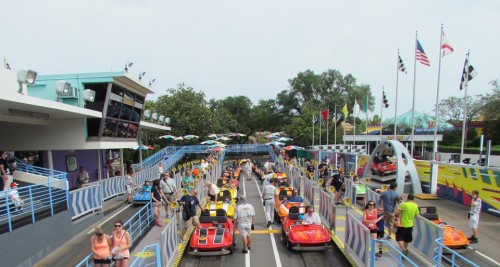 The attraction was originally known as the “Walt Disney World Grand Prix Raceway” a nod to the Formula One series that races to day in the Monaco Grand Prix. However, From 1999 to 2008 the track featured a partnership with the Indianapolis Motor Speedway, home of the Indianapolis 500. Nea the end of the ‘pit lane’ you can see the iconic black scoring pylon with spots for 33 cars and a few of the bricks in the “Yard of Bricks” came from the actual brickyard, which was the name for the Indianapolis Motor Speedway, as it was once paved entirely with bricks.

Like the length and theme of the attraction, interest has changed over the years. But I hope young kids will always be able to experience thrill of racing at Walt Disney World.

3 thoughts on “A Disney Kid’s View of Tomorrowland Speedway”