Disney mentioned changes coming to the Polynesian Resort at the What’s New What’s Next presentation earlier this month, now they’ve updated us with some additional information on what we can expect as the resort transitions.

As announced it will be getting a few DVC Suites as bungalows out over the water. To accommodate this change the name will revert back to its original 1971 opening-day name: Disney’s Polynesian Village Resort.

Disney also announced a brand new children’s activity center called Club Disney will be opening at the resort next month. Imagineers drew inspiration from classic Disney Little Golden Books, including “Alice In Wonderland,” “Pinocchio” and “Lady and The Tramp” to make the play areas. Club Disney replaces the Neverland Club. 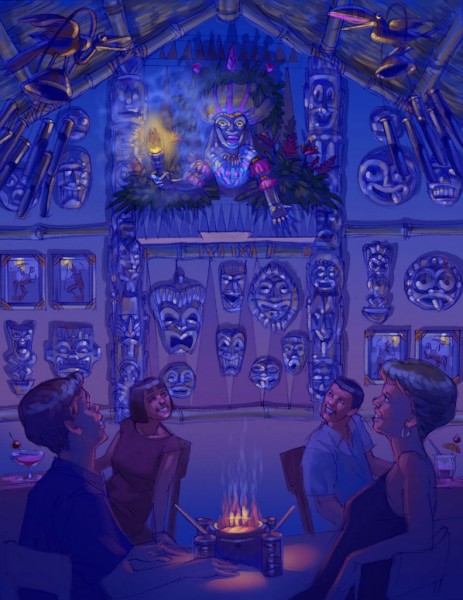 While we knew an East coast version of Trader Sam’s was coming, we now know the name – Trader Sam’s Grog Grotto. We also have a look at a new piece of concept art – a mask room. (Ps, I think we found where the Goddess Pele ended up after her eviction from the Tiki Room.)

No word on when Trader Sam’s will open, but a new food and beverage location, Pineapple Lanai kiosk, which will offer a guest favorite – Dole Whip – will open later this year.

Finally, we learned that the resort’s Nanea Volcano pool is also scheduled to receive several enhancements. There will be a new aquatic playground with slides for children, a new hot tub, and a larger deck with more seating for guests.

“In size and scope the renovation and expansion of Disney’s Polynesian Village Resort is a significant investment in the guest experience at Walt Disney World Resort,” said Tom Wolber, senior vice president of resort operations and transportation operations for Walt Disney World Resort. “Once completed, the iconic resort hotel will be completely re-imagined with a level of detail as only Disney can deliver.”

All this sounds pretty good. But sadly it does also mean that the waterfall entrance and lobby waterfall we all know and love are gone. What do you think about the coming changes to one of Walt Disney World’s most iconic resorts?