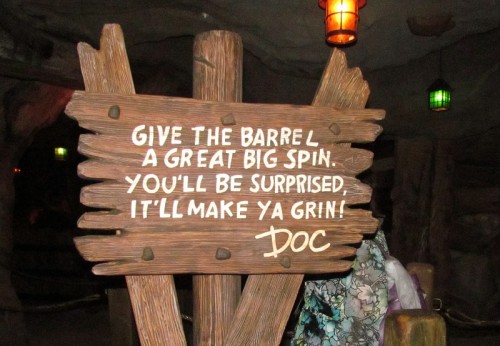 The Seven Dwarfs Mine Train standby queue features three interactive games you can play while passing the time. Projects like these are considered part of the Next-Gen technology that’s being introduced with MyMagic+.effectiveffe

The first element is a trough game where you sort gems by color and shape to reveal bonus animation. It’s cute and there is an opportunity for many guests to be involved simultaneously. Station two is a musical water fountain, where guests make the music by placing their hands in the water. Seems like this could be a mess, but it was fun to do. The last one is a set of 7 barrels full of gems. You spin the barrel, then look up to see some special animation on the ceiling of the mine.

I was definitely surprised by the games and how well they were done. I’m curious to see how queue pacing works and if you get a chance to play the games or if, like at space mountain, you feel rushed to keep pace with the moving queue. Also, I’m surprised by how close all three of the games were, I feel they could have spread them out a bit more.

That said, it’s another effective implementation of Disney’s new ‘Scene One’ elements where they’re using technology to extend the storytelling of the attraction. I look forward to seeing what’s next.