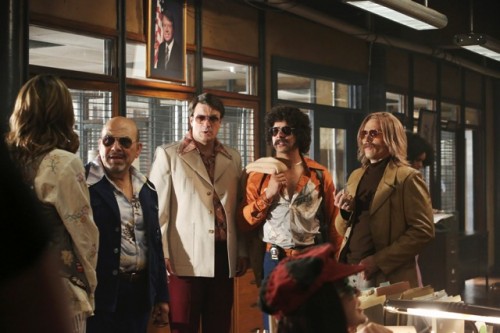 We’re taking a groovy trip back in time on Monday night’s Castle. That’s right, after almost a month off, the show is back with the first of four new episodes to finish out the season.

The mystery of the episode is going to revolve around a crime from the 1970’s. It all starts with construction workers find the body of a mobster who disappeared in that decade. Beckett and Castle land the case, so they have to track down any lead they can that hasn’t run cold.

Which brings them to a star witness who thinks it is still the 70’s. So, in order to get any information out of him, they are going to have to play along. I know from the pictures that will involve dressing the part, but I bet we get some slang from the time as well.

Frankly, I think this sounds like a fun twist on the familiar crime solving format of the show, and I can’t wait to see how it all plays out.

While I know nothing specifically, I bet they will be moving forward with their wedding plans as well. After all, if they are getting married in May (like for the season finale anyone?), they’ve still got a lot of work to do to pull that off.

Flash back during the normal time slot on Monday, and then flash on over to Carstairs Considers and read my recap on Tuesday.