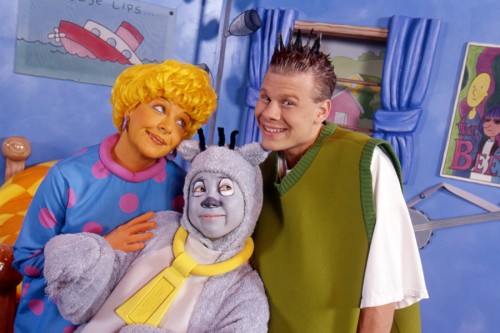 “LIGHTS CAMERA ACTION!” on another DHS History Lesson. Remember, we are discussing the past at the Studios in honor of its upcoming 25th anniversary on May 1st. Now this week, we are covering one of the weirdest things Disney has ever done, Disney’s Doug LIVE!

Now, the show itself wasn’t weird, it was how they obtained the show. Now, this isn’t DHS related to begin with, but it becomes intertwined eventually. So, this animated series originally premiered in 1991 on Nickelodeon. It had Doug Funnie going through the trials and tribulations of his new school in Bluffington with his friend, Skeeter, his crush, Patti, enemy, Roger and his trusty dog, Porkchop, among others. Throughout the show, he would write in his journal, which would become the show’s narration.

Here’s the catch, Disney bought Jumbo Pictures, the creator of Doug’s production company, in 1996…which included the rights to Doug. So, in 1996, the show reappeared on ABC’s Saturday Morning, then eventually One Saturday Morning (see my love letter to that here). With the channel change came two new titles (Brand Spanking New! Doug, then Disney’s Doug), a 3 month time lapse, and updated story arcs and character designs.

With the acquisition came a feature length film, costumed characters at the parks, and Disney’s Doug LIVE! This 30 minute original musical was located in the ABC-TV Theater (which is now where American Idol Experience is located) and premiered in March of 1999. The show was pretty much a musical episode of the show. Doug tries to win tickets to see The Beets, his favorite band, so he can take Patti Mayonnaise, his crush. In a fantasy sequence after his plan to ask Patti fails, he takes on the role of Quailman, his own personal superhero, as he tries to rescue Patti from Evil Dr. Rubbersuit (or Roger).

Before the show even started, a “warm-up” person would entertain the crowd, quiz the guests on Doug trivia, and pick audience members to be a part of the show. One would be part of the Quailman sequence, while 3 others would become The Beets for that segment.

The sets were pretty cool as they were all on giant turntables. They would spin to show Doug’s room, Evil Dr. Rubbersuit’s lair, Bluffington High and The Beets’ concert. Unfortunately, they were prone to break down, leading to frequent closings of the show.

The show finally ended in 2001, after the show had already stopped airing new episodes. After a long empty period in the theater, it was finally re-opened with the American Idol Experience.

I would love to see this return, as the music was super great (Patti’s numbers were the best), but I understand it never will as the show doesn’t exist. However, I just want Idol to leave and be replaced with either a new game show concept, Dancing with the Stars in the same format as Idol, or a new Disney cartoon show (like a Phineas and Ferb musical?).

Did you ever see Disney’s Doug LIVE!? Would you like to see it return? On a scale of 1 to 10, how great is Patti Mayonnaise’s full name? Let me know in the comments below! Next lesson I will teach you about the wonders of Who Wants to be a Millionaire PLAY IT! Until next time…That’s a wrap!

(P.S. The video of the show I’ve included is in 3 parts, but it’s great as the person who performed Skeeter annotated it with facts from the show. Also, Patti also starred at the Comedy Warehouse during the time and she was THE BEST in both shows. Anyway, enjoy!)