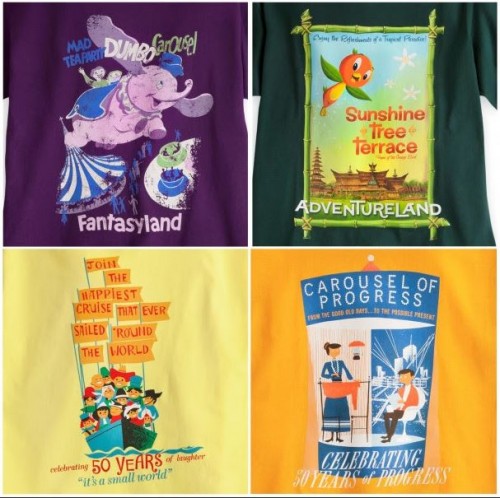 Two new batches of Disney attraction poster based t-shirts have just been announced. The previous Space Mountain shirts, were very popular, so I’m glad to see they’ve decided to continue the series. Like Space Mountain shirts, these Poster Tee Series shirts are only available for a limited time online at the Disney Store. Also as before, the shirts are only produced and shipped after all the orders are in, so allow 6-8 weeks for delivery.

Up first are a pair of shirts that will set your retro-hearts afire. From April 15-20 – You can purchase a purple Fantasyland at Disneyland shirt, or a Sunshine Tree Terrace at Magic Kingdom green beauty. The original Fantasyland attraction poster referenced for the purple tee was created in 1955 by Bjorn Aronson.

You can order the two shirts in the first batch right now at this link. The return on the 22nd, and order the next batch. Your purchase will help support The Disney Blog.