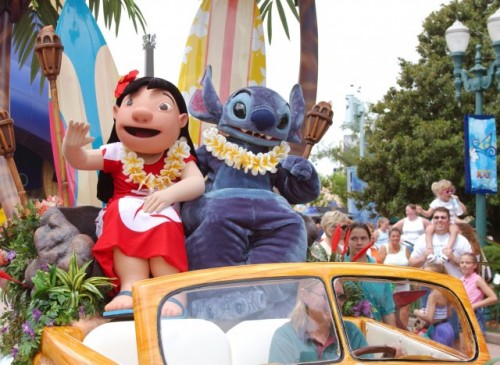 Welcome back to where showbiz takes center stage… Hollywood Studios, of course! It’s time for your 2nd DHS History Lesson. For those just joining us, let me tell you a little bit about myself, I LOVE the movies! (Guess the ride below!) We are doing these lessons for you in honor of the Studios’ upcoming 25th Anniversary on May 1st.

This time around, we are showcasing the simplest parade of all-time, and yet, it is my absolute favorite for that exact reason. The Disney Stars and Motorcars Parade premiered on October 1st, 2001 as part of the 100 Years of Magic campaign the parks were celebrating (That was the same year of the hat…You’re welcome Disney fans). The parade featured 14 or-so decked out motorcars that had the characters riding in style aboard their decked out automobiles.

It was my first Disney parade and my favorite for its fantastic mix of characters. Toy Story, Monsters Inc., Hercules, Mulan, Mary Poppins, Star Wars, and many more were featured in wonderfully decorated cars that led a processional from Star Tours to the front entrance of the park. It also featured, in my opinion, the best parade song ever. The “Curtain Up and on with the Show!” lyrics helped set the mood for the entire park, keeping that glitz and glamor of the old Hollywood ideals alive. And, they utilized some killer sforzandos…just sayin’ (#NerdyChoirTerms)

The neatest part was the ability to easily showcase new characters quickly and efficiently with their Grand Marshall float. They featured Giselle, Chicken Little, and Ratatouille, among others, throughout its 7 year run. Unfortunately, the parade made its last processional through the park in March of 2008. DHS then received Block Party Bash, the crap-tastic Pixar Pals Countdown to Fun!, and now, the parade route remains bare. The Motorcar parade was sent to the Walt Disney Studios in Paris, where it currently resides.

It really is my favorite parade. Its simplistic nature allowed for a more intimate feel, giving guests more interaction opportunities with the characters. It also gave off that regal nature that the park does, as a whole, oh so well. I would love to see it come back in a new form, as DHS yearns for a fun movie-centric parade. Let’s have Frozen, Tangled, and Wreck-It Ralph units added to the eclectic combo of cars from before (KEEP HERCULES!).

Now, I realize that DHS has had some fantastic parades, like the Hercules Zero to Hero Parade or the wonderful Mulan: The Parade, but the down-to-Earth nature of the motorcars was a nice change of pace after the showy parades of the past.

We will cover Disney’s Doug Live! In the next lesson. Until next time…That’s a Wrap!

1 thought on “DHS History Lesson: Automobiles are a Big Deal!”