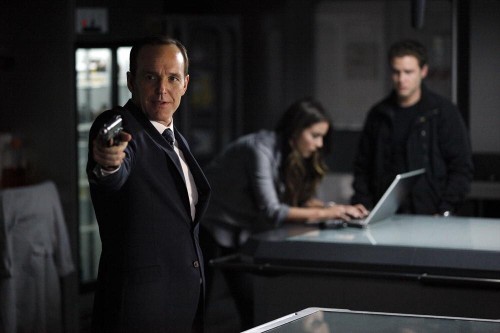 When I left the theater on Saturday after watching “Captain America: The Winter Soldier,” one of my first thoughts was, “What are Tuesday nights going to look like from now on?”

Last week, it turns out, our team was right in the middle of the events of the movie. Simmons and Tripp are at the Triskelion and the rest of the team is on the bus no longer trusting each other as the bus is mysteriously redirected and heading straight for Victoria Hand, who may or may not be the Clairvoyant (though I’m guessing she’s got her own agenda).

This week’s episode starts right where the last one ended as the team continues to fall apart in mistrust and the truth about S.H.I.E.L.D. is revealed.

Between the story-lines that they’ve been building since the show started and the aftermath of The Winter Soldier, Agents of S.H.I.E.L.D. has a lot of going on and I am looking forward to it.

Marvel released a video of the cast discussing the impact that the movie will have on the show.

Will you be watching Marvel’s Agents of SHIELD tonight? Come back and let us know what you thought of the show.

previousWould You Pay $12.95 for a Magic Band?
nextMarvel News Roundup – Life After The Winter Soldier