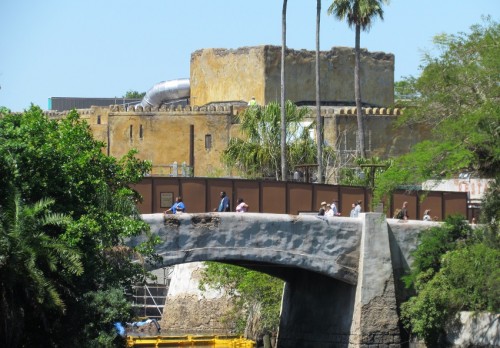 Festival of The Lion King is the number one rated show by guests of Walt Disney World. So when Disney decided to build Avatar, they had to move the show to a new location. That location is in Africa, makes sense, and will be in a completely new building. The show, however, is expected to remain much the same. Right now no official re-opening has been announced, but it’s expected to be sometime in late June or early July 2014.

You can’t see much of the construction from guest areas. But I was able to get this video showing how big the building is along with some of the great detail work they’ve already accomplished.

From what I’m told, the new area is very detailed. Fans of the show will be happy and a few additions to the area are also expected to be crowd-pleasers. The only thing I’m worried about is the flow of guests into and out of the area. Original plans had guests entering from Discovery Island and exiting into Africa. Even if that’s reversed, it’s going to get very busy in that area, especially when there is a parade on. Something to keep an eye on.

Will you be seeing Festival of The Lion King on your next visit to Disney’s Animal Kingdom?

1 thought on “Festival of The Lion King Theater Construction Update”