Washed Ashore – Art to Save The Sea at SeaWorld 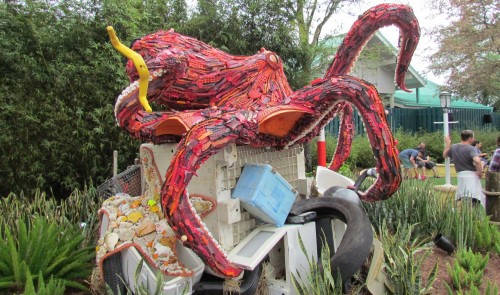 SeaWorld Orlando is celebrating the company’s 50th anniversary and they’ve partnered with Washed Ashore, a non-profit based in Oregon that uses plastic debris found on the beach to make sculptures. The impressive art helps drive home the point that too much trash and pollution is making its way into our oceans and waterways. A timely message as the search for signs of Malaysian Air flight 370 highlights the problems of a debris filled ocean.

Some of the debris used to make the sculptures highlighted in that video was washed up after the 2011 Japanese earthquake and tsunami, but most is garbage left by beach goers or washed into the sea from storm drains. Join SeaWorld’s message of conservation and do your part by not just recycling, but securing your trash and curb pick-up so that none of it finds its way to the ocean.