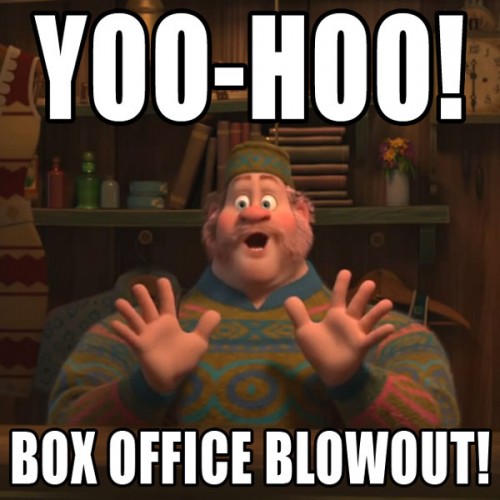 If you hear loud crowing from Burbank this weekend, that’s Walt Disney Animation Studios justifiably cheering for the success of their 2014 hit animated feature “Frozen.” This weekend, Disney’s “Frozen” officially became the highest grossing animated film of all time blowing out all other animated feature films with over $1.07 billion (with a b) worldwide. That total also places it the list of the top 10 biggest films of all time becoming Disney’s 3rd film on that list. The Walt Disney Studios’ seventh billion-dollar release, “Frozen” has earned an estimated $398.4 million at the domestic box office and $674 million internationally.

“Frozen” is the first billion-dollar film for Walt Disney Animation Studios and its first film to receive the Academy Award for Best Animated Feature. “Frozen” opened wide domestically on November 27, 2013, posting the #1 all-time Thanksgiving debut ($93.6M five-day, $67.4M three-day) and Walt Disney Animation Studios’ biggest opening ever. It remained in the top 10 films at the domestic box office for 16 consecutive weeks, the longest run by any film since 2002.

Internationally, “Frozen” is the biggest Disney or Pixar animated film of all time in 27 territories, including Russia, China, and Brazil. In Korea, where the film has grossed an estimated $77.1 million, “Frozen” was #1 for the first five weeks of release and is the biggest animated film, the second biggest non-local film, and Disney’s biggest release of all time. It’s also the highest-grossing animated film of all time in Denmark and Venezuela. Since its debut March 14 in Japan, “Frozen” has claimed the #1 spot in its first three weekends and continues to play strongly with an estimated $50.5 million to date.

“Frozen” is doing amazing in the home video market as well. It is the fastest-selling digital release ever and sold over 3.2 million Blu-ray/DVD units in its first day, putting it on track to be one of the biggest home entertainment sellers in a decade.

The Platinum-certified “Frozen” soundtrack returned to the #1 spot on the Billboard 200 album chart last week for a seventh time with more than 1.6 million copies and over 5 million individual tracks sold. The album has also held the #1 position for five nonconsecutive weeks at Spotify and is approaching 110 million streams worldwide. The Oscar-winning song “Let It Go” has sold over 2.6 million copies, and the film clip of the song has been viewed over 160 million times on YouTube.

With original songs from Kristen Anderson-Lopez and Robert Lopez, and an original score by Christophe Beck, “Frozen” is directed by Chris Buck and Jennifer Lee, written by Jennifer Lee, and produced by Peter Del Vecho. It features the voice talents of Kristen Bell, Idina Menzel, Jonathan Groff, and Josh Gad.

Believe it or not, “Frozen” is still showing in theaters in 2D, 3D and Sing-A-Long versions, or you can watch at home on Digital HD & 3D, Blu-ray Combo Pack, and DVD.

previousInstapic: Avatar grows behind those walls
nextMarvel’s Agents of S.H.I.E.L.D. episode 16 – End Of The Beginning