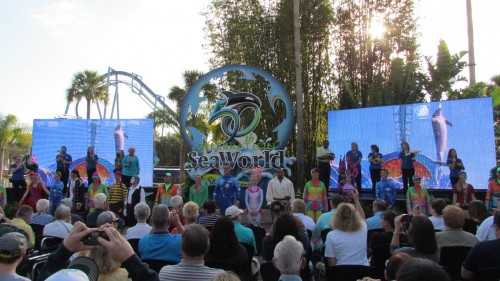 This morning at SeaWorld Parks across the united states, ceremonies were held to commemorate a key event in the company’s history: the opening of the original SeaWorld in March 1964 on Mission Bay in San Diego. This morning I attended the Orlando ceremony where the company marked its 50 years of caring for animals as part of its conservation minded mission.

Starting today SeaWorld is kicking off an 18-month “Sea of Surprises” highlighting the most memorable SeaWorld experiences in San Diego, Orlando and San Antonio. During SeaWorld’s 50th Celebration visitors will be invited to take part in the excitement through new interactive experiences, shows and pathway performances, even more up-close animal encounters throughout the park and “The SeaWorld Surprise Squad” treating guests with prizes every day.

At this morning’s event, I was able to meet Steve Welch, Creative Director for Entertainment Productions at all three parks in Orlando, and Corey Oxman, Senior Animal Trainer and Animal Ambassador, who talked about what a guest coming to SeaWorld Orlando can expect as part of the celebration:

Below the cut are highlights from the Sea of Surprises and another video focused on the rich 50+ year history behind SeaWorld and its missions. It captures just a small slice of the great work they’ve accomplished over the years: