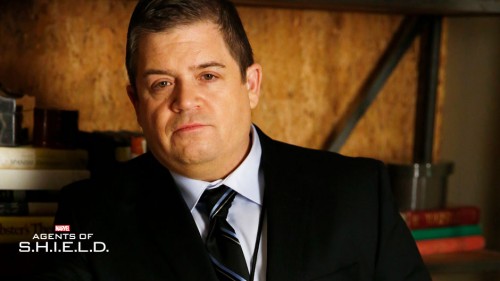 Marvel’s Agents of S.H.I.E.L.D. is bringing the guest stars out of the woodwork. Adrian Pasdar (Heroes) has been cast as Glenn Talbot, an old Hulk villain and Patton Oswalt (King of Queens, Ratatouille and a guest spot on Parks and Rec with a speech so full of synergy, that Eisner would have been proud) has been cast as Eric Koenig, who, in the comics, was a Howling Commando with Cap in WW II. Not only is Oswalt a Whedon alum (from Dollhouse) he’s a huge fan of the show.

He said his involvement with the show does have a drawback though:

“When you’re in something, now you know what’s coming. A big part of me is still a big consumer of this stuff. I have friends now that write some of the comics, and they’ll send me issues, [but] I like having to wait until every Wednesday and get it once a month. That’s sort of part of the story for me. It’s that push-pull of, I want to know stuff now, but I also like the waiting is part of the fun.”

On the silver screen, Scarlett Johansson’s scenes in Avengers: Age of Ultron are being “fast tracked” because of her pregnancy. And, while we’re on the subject of the Black Widow, Kevin Feige gave a quick update on the developing solo movie for her.

Sebastian Stan has signed a nine movie deal with Marvel which raises the question, “Where are they going to take Bucky from here” and, “What happens when Chris Evans finishes his six movies?” Is there a connection?

The last bit of confirmed news is that Avengers: Age of Ultron (and Star Wars VII as well) will be released in IMAX.

This hasn’t been confirmed yet, but keep your eye on May 6, 2016. That’s the day the Superman/Batman movie releases in theaters as well as a Marvel movie that hasn’t been officially announced yet. Rumors started circulating that Dr. Strange is the movie in question, but Kevin Feige said that they will not be changing their release date. If you’re going to play chicken with the Man of Steel and the Dark Knight, you probably have a stronger card to play than Dr. Strange.

Captain America 3 is the movie that most are now saying will go up against their Distinguished Competition.

What would you like to see open on that date?