Once Upon a Time in Wonderland Preview: 1-11 – Heart of the Matter 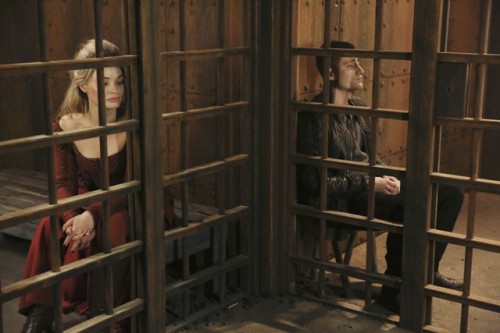 Well, that was an interesting twist in last week’s episode. How will it come into play that Cyrus’s mother was also Jafar’s mentor – aka the one he turned into his staff?

It sounds to me like Cyrus and Alice are going to learn that in this episode as the official teaser promises that they will have their “priorities changed.” Since last we saw them, they were heading to Agrabah, that’s the only thing I can think of.

Meanwhile, the Red Queen is being held prisoner by Jafar. The only person who can save her is Knave. And Knave is about to be used by Jafar in the ceremony that brings him the power he is craving. (My theory is that bring the genies together might help free them if anything at all consider who is was Jafar learned about this spell from. But that’s just a theory; we’ll have to see if I’m right.)

But the flashback is what I’m most looking forward to seeing. We’re going to see the Red Queen strike up a friendship with the Queen of Hearts, aka Cora, Regina’s mother from Once Upon a Time. And Will is going to make a request from Cora as well. I think his comment from a couple weeks ago that “my heart belongs to another” might mean something different than I originally thought.

We are in for quite a ride in these final three episodes, I have a feeling.

As always, I’ll have my recap for this episode up over there come Friday.