While my wife jumps for joy at the announcement of pre-production work commencing on Pixar’s “The Incredibles 2”, I’m excited to see a teaser synopsis for “Star Wars Episode VII” (though I’m excited for another trip to Metroville as well).

After confirming that the new trilogy will take place 30 years after Return of the Jedi, Disney gave this vague sentence describing the next installment of the Star Wars franchise: “a trio of new young leads along with some very familiar faces.”

Although only R2D2 was confirmed as making a comeback, Mark Hamill, Carrie Fisher and Harrison Ford have all but confirmed that they will be reprising their iconic roles in some fashion.

Casting is rumored to be announced soon and the names floating around are all over the place. Adam Driver (Inside Llewyn Davis) is on the list of possible actors to play the villain and Lupita Nyong’o (12 Years A Slave) is also rumored for a part as is any number of young male actors. 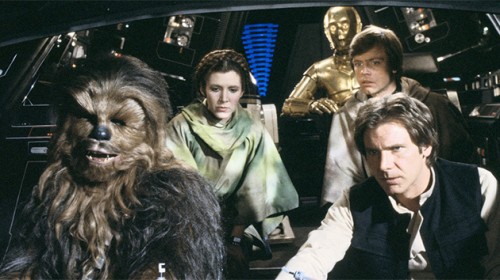 Of this group from Return of the Jedi, how many do you think will appear in Episode VII?

Who do you think should be cast in the new trilogy?

previousDispatch – “Did you Know?”
nextWatch the First 10 Minutes of Captain America: The Winter Soldier