Figment and Dreamfinder to get their own Comic Book 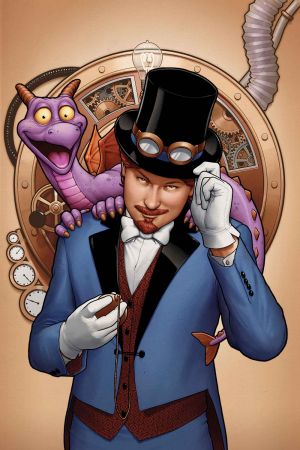 I have been very curious to see where the Disney Kingdoms comic line goes after their trip to the Museum of the Weird.

Marvel has announced, with one little spark of inspiration, that they will be taking a journey into imagination with their next five-issue story starring Figment (ok, bad puns over).

Figment #1 is debuting on June 4 with Jim Zub penning the story and Filipe Andrade as the artist.

“I was contacted out of the blue by editor Bill Rosemann at Marvel,” Zub recounts. “He’s been handling the Disney Kingdoms comics and, with so many fantasy projects under my belt and with magic and whimsy showing up in other stories I’ve written, he felt I’d be a good fit to pitch on FIGMENT. So far I’m doing my best to prove him right.”

He goes on to say:

“Expanding the story of Figment has been intimidating, but I’m genuinely enjoying it. I want to do right by Disney fans and new readers alike, creating an entertaining story, and that comes from working with engaging characters. Digging a bit deeper into Figment and Dreamfinder has been a fun challenge.”

Based on the cover, the art will be heavily inspired by the steam punk theme.

So, how much of the attraction (or its previous incarnations) will influence the story?

“The ride serves as an underlying framework for the story, though we obviously have to give it a clear antagonist and build up more challenges than people who went on the ride have seen before. Even when we’re deviating from the ride I’m looking for ways for it to inform the visuals or appear in other unexpected ways.”

And, on the Dreamfinder:

“Dreamfinder is an eccentric inventor, an excited adventurer, and an intrepid explorer,” he says. “He’s a bit Reed Richards, a bit Kurt Wagner and a bit Stephen Strange. He’s someone who doesn’t want to settle for a mundane life and the creative risks he takes could lead him to greatness, but those highs have a long way down if he falls.”

I am really looking forward to this story, what about you?