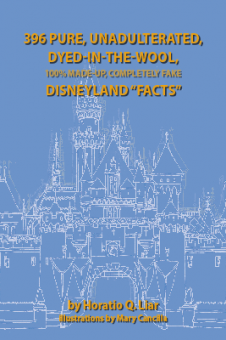 I have a confession to make. I like to spread rumors and urban legends about Disney theme parks. The closer to the edge of implausible the better. Did you hear that the Mickey and Friends parking garage at Disneyland is sinking? That one was mine. It’s fun to hear them come back to you at some later point, like a giant game of telephone.

Crafting these rumors is an art form. One of the real Picasso’s of the genre has put out a book with a collection of “396 pure, unadulterated, dyed-in-the-wool, 100% made-up, completely fake Disneyland ‘facts’.” It’s full of Steve Martin-esque humor (which is appropriate since Martin himself worked at Disneyland and adapted much of his performance style of humor from Disneyland’s own Wally Boag and Fulton Burley at the Golden Horseshoe Revue). The truly funny stuff that builds up into a giant ball of laughter that erupts from your gut.

If you’re at all a ‘Disney’ person, then you’ll enjoy reading ‘Facts’ like this:

According to a survey on the Mousetravelketeers.com discussion board, the top 10 things you need to bring with you for a relaxed, trouble-free day at the Disneyland resort are: Money

Some of this stuff, absurd as it sounds when you read it, sounds very familiar to urban legends I’ve heard guests say myself. Like this one:

The Disneyland Hotel was originally independently owned and operated. Eventually, Disney decided that they would rather own the hotel outright, but the owners weren’t interested in selling. To help the owners change their mind, Michael Eisner proposed that the company build an enormous impenetrable wall between the hotel and Disneyland if they didn’t sell. The deal was signed just weeks later.

Author Dominick Cancilla taps right into the funny bone of every Disney fan in “396 pure, unadulterated, dyed-in-the-wool, 100% made-up, completely fake Disneyland ‘facts’.” You can buy it in convenient carry-around print edition or the digital friendly Kindle edition on Amazon.