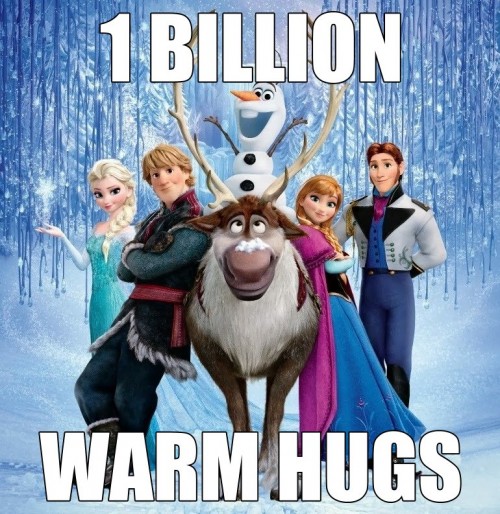 “With ‘Frozen,’ we knew we had something truly special on our hands, and it has connected with fans and filmgoers around the world in a way we only dreamed was possible,” said Alan Horn, Chairman, The Walt Disney Studios. “Animation is the cornerstone of our company, and thanks to the vision, dedication, and talent of our tremendous cast and filmmaking team, Disney Animation has come roaring back with a new classic for fans of all ages.”

“Frozen” opened wide domestically on November 27, 2013, following a five-day exclusive engagement at Disney’s El Capitan Theatre in Los Angeles. In its record-setting nationwide opening, “Frozen” became the #1 all-time Thanksgiving debut with a $93.6M five-day gross and a $67.4M Friday-Sunday gross over the holiday period. It was Walt Disney Animation Studios’ biggest opening ever. “Frozen” was the #1 movie in its second weekend of wide release and, after posting stellar numbers throughout the holiday season, returned to the top spot four weeks later in its sixth weekend. Due to popular demand, a special sing-along version of the film opened in theaters nationwide January 31, its 10th weekend of wide release. “Frozen” has remained in the top 10 films at the domestic box office for all 14 weeks of its wide release, the longest run by any film in four years.

Internationally, “Frozen” is the biggest animated film released by The Walt Disney Studios in more than 25 territories, including Russia, China, and Brazil, and Walt Disney Animation Studios’ biggest release in over 50 territories, including UK/Ireland, Australia, Mexico, and Argentina, as well as the Latin America region as a whole. In Korea, “Frozen” was #1 for the first five weeks of release and is now the biggest animated film, the second biggest non-local film, and Disney’s biggest release of all time. It’s also the highest-grossing animated film of all time in Denmark and Venezuela, and the biggest non-sequel animated film in the U.K./Ireland. “Frozen” debuts in one remaining international territory, Japan, on March 14.

The Platinum-certified “Frozen” soundtrack, featuring songs by Tony Award® winner Robert Lopez and Kristen Anderson-Lopez and a score by Christophe Beck, returned to the #1 spot on the Billboard 200 album chart last week for a fifth time, the first soundtrack to do so since 1998. It entered the chart’s top five in early January and has been #1 or #2 for eight consecutive weeks. It also hit #1 on iTunes’ Overall Album Chart in 31 countries including the U.S. The Oscar®-winning song “Let It Go,” performed by Tony Award winner Idina Menzel, who voices Elsa in the film, is also certified Platinum and last week reached #18 on Billboard’s Hot 100 chart.

“Frozen” is still available in theaters in 2D, 3D and Sing-A-Long and is now available on Digital HD & 3D. It arrives on Blu-ray Combo Pack, DVD & On Demand on March 18.