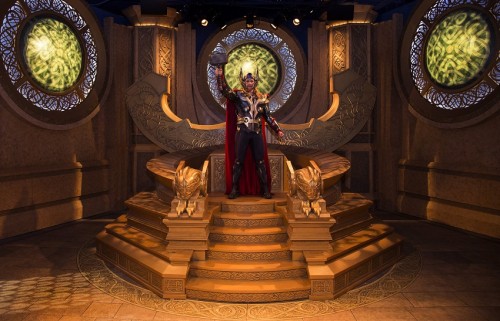 Disneyland’s Tommorowland has always been the black sheep of the theme park. Never quite fitting in to the time in which it existed, the whole concept of a land based on the unknown realm of the future, has been difficult for even Disney’s famed Imagineers to master. It requires constant updates just to remain far enough ahead of the game to be enticing. Unfortunately, some of those updates have been less than successful and now we’re left with a confused mess.

One of those areas was an attempt at bringing a little bit of EPCOT to the west coast (not as exciting as the themepark concept known as WestCOT, alas) in Innoventions. It never really found a sweet spot between corporate exhibits and Disney quality entertainment. But three new exhibits have been both crowd-pleasers and, perhaps, chart a course for all of Tomorrowland.

The Marvel Super Hero exhibits, which right now include Tony Stark Expo featuring Iron Man and Thor: Treasures of Asgard where you get to meet Thor himself, have found life well beyond their initial planned limited run. With a Captain America area opening in March, we will soon have a trio of Marvel characters taking up residence in Innoventions.

Which leads to this question — what to call this area? S.H.E.I.L.D. HQ or perhaps Tony Stark Expo? What do you think?

And the big question up for discussion, could Disneyland re-theme all or part of Tomorrowland to the Marvel Universe and get away with it? There’s a huge chunk of real estate if you consider the area that now is home to Innoventions, Submarine Voyage, Autopia, and the former Motor Boat ride. What do you think?

4 thoughts on “Should Disneyland Re-Theme Innoventions to Marvel?”