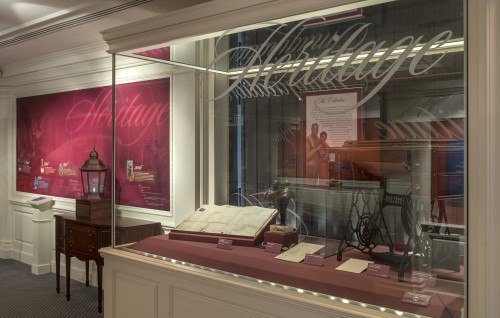 Walt Disney World guests visiting The American Adventure pavilion at Epcot usually don’t spend much time exploring the art and exhibits inside the pavilion. Which is a shame, because there is usually some amazing stuff there. One recent example of a real world-class museum quality exhibit is “Re-Discovering America: Family Treasures from the Kinsey Collection.” The good news is that even if you have made a point to visit the exhibit, additional images, artwork and artifacts related to watershed moments in American history will soon be on display.

Walt Disney Imagineers, along with philanthropists Bernard, Shirley and Khalil Kinsey, have begun to add several new artifacts and display cases to the popular cultural exhibit and will continue to do so in coming months.

“The Kinsey Collection shares the powerful and previously untold stories of those who dared to dream,” said Erin Youngs, vice president of Epcot. “Representing more than 400 years of African-American achievement and history, the Kinsey Collection showcases the best of the American spirit with a nod to ingenuity and innovation. We are delighted to expand the exhibit and bring even more of these treasures to Epcot guests.”

Themed to hope, belief, courage, imagination and heritage, the exhibit provides empowering stories of American history from voices that are not commonly seen or heard. Art and artifacts pay homage to African Americans who helped build and transform a nation. Their stories of determination and courage, from the nation’s early days to the present, are at the heart of the exhibit.

New objects joining the exhibit this spring include:

The Kinsey family’s private collection features rare art, documents, books and artifacts and has been displayed throughout the U.S., including the Smithsonian National Museum of American History. Since opening at Epcot on March 8, 2013, approximately 40 pieces have been on display at the interactive exhibit where guests are able to use touch screens to further explore the art, artifacts and history. Guest-activated lanterns also help bring the history to life with narration provided by celebrity narrators including Academy Award winner Whoopi Goldberg (“The View”) Diane Sawyer (“ABC World News with Diane Sawyer”), actress Kerry Washington (“Scandal”) and more.

“Re-Discovering America: Family Treasures from the Kinsey Collection” is included in Epcot admission. For more information about the collection, visit thekinseycollection.com.