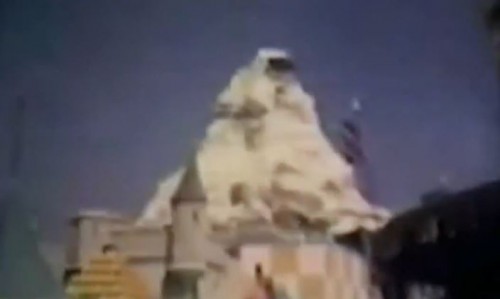 Did your family visit Disneyland or Walt Disney World back in the day? If so, check your closets and attics. You never know what gems you may find. This footage from Disneyland around 1960 has been in the family of Steven Buehler for as long as he can remember. He smartly transferred it to digital media and has now made it available for all of us to enjoy.

I was really struck by some of the clothes, and that amazing pink hat one child was wearing. I love that shot of the Monorails at the end. I just wish that tree branch wasn’t in the way. What did you find amazing about this new footage?

“Years ago, shortly before my grandfather passed away, the extended family sat down with a 8mm film projector and a screen, with a video camera set up in front of it, and watched all the old family films from the 1950s and 60s as my grandfather talked through them about when and where each moment was shot. It’s been copied from tape to tape until I eventually transferred it to DVD and then to digital file.

Buried in the over two hours of footage is about two minutes of the original Disneyland not long after it opened to the public in 1955. Admission into the park was one dollar, and guests initially paid to see each individual attraction. By the time this footage was shot, the famous A-thru-E lettered ticket books had already been introduced.”

Do you have any footage of vintage Disneyland or Walt Disney World hanging around in your home or your parents home? We’d love to share it with our readers.