ABC’s Pushing Daisies Could Come Back To Life on Broadway 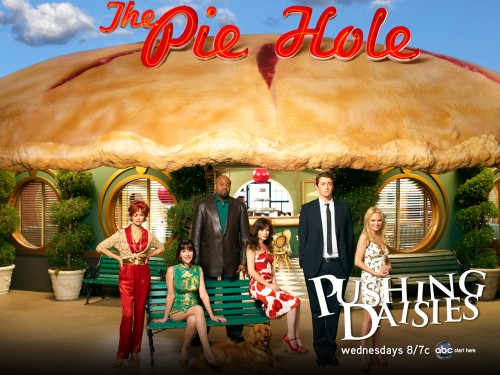 Will the Pie Hole be reincarnated on Broadway?

Today a cancelled show with legions of fans may find itself revived on Netflix or via a Kickstarter movie. But the original path to new life for great entertainment was from screen to Broadway. According to a story in Variety, the short lived, but much loved ABC TV series Pushing Daisies may find itself resurrected on the great white way.

To be honest, I wouldn’t get my hopes up. Show creator Bryan Fuller has talked a few times before about re-animating the show. On the other hand, Tony Award-winner Kristin Chenoweth was one of the show’s stars and is a natural fit on Broadway. Ellen Greene was no slouch on the stage either. So who knows. Think of all the cheerful songs they can write about bringing someone you love back to life and killing someone else simultaneously and the big show stopping synchronized swimming number featuring the Darling Mermaid Darlings.

Actually Fuller says the musical could be centered on Chenoweth’s character Olive Snook. You remember, the one who breaks out into song all the time and pined for the lead who was in love with someone else. Yep, sounds like a musical already.

I was a big fan of the show and would love to see it come back in some form. I’d prefer a relaunch of the TV show, but I’ll take a Pushing Daisies Broadway musical if that’s all we can get. What do you think about the idea?