As “Captain America: The Winter Soldier” quickly approaches, we are getting more and more info on the movie and, by extension, “Avengers: Age of Ultron.”

Recently, Bob Iger announced that The Winter Soldier will lead directly into Age of Ultron (though if you’re looking for Thanos, you’ll have to see “Guardians of the Galaxy”).

As with the other Phase 2 movies, Marvel is releasing a prelude comic to tie into The Winter Soldier (you can read my thoughts on the Marvel tie-in comics). We can also expect a crossover episode of Agents of S.H.I.E.L.D.

And, you can check out what The First Avenger himself has to say about the new movie.

Staying on the topic of Cap, but leaving the big screen, beginning on March 7, the Star Spangled Man will be the third Avenger to have a presence at Walt’s Park.

And the last bit of news is still filed under the rumor category, but I am really hoping it comes true. There is talk that the second wave of Disney Infinity characters will include characters from both the Marvel Universe and the Star Wars Universe.

So, who would you like to see as a playable character? I would love web-sling as Spidey or battle lightsabers as Yoda.

One last treat: here’s a picture of Jaime Alexander as Sif on the set of AoS. 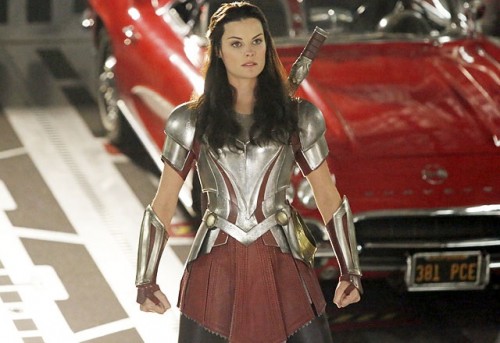