Jimmy Fallon Rocks Out With the Muppets on Final Show 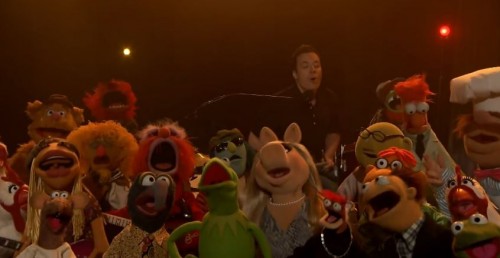 It’s the end of an era, with Jay Leno leaving The Tonight Show and passing the torch to Jimmy Fallon. To commemorate his final night as host of Late Night, Jimmy decided to end the show on a musical note accompanying the Muppets, performing “The Weight” by The Band.

Having the Muppets on the show was also a poignant moment for NBC, because it represents a historical moment in the relationship between the company and the Muppets. In case you’re unfamiliar with the story of the NBC Pipes, in 1964, Frank Oz, Jim Henson, Don Sahlin, and Jerry Juhl visited the studios for a Muppets guest appearance, and ended up painting the pipes in a closet to look like Muppet-like creatures while they waited. Even through renovations and demolitions at the NBC studios, the pipes still remain intact 50 years later.

Jimmy’s performance with the Muppets was a fitting way to end the show on a more lighthearted note, while still feeling reminiscent. And not to mention a great way for Disney to market the upcoming “Muppets Most Wanted” film.

What did you think of Jimmy and the Muppets’ performace?