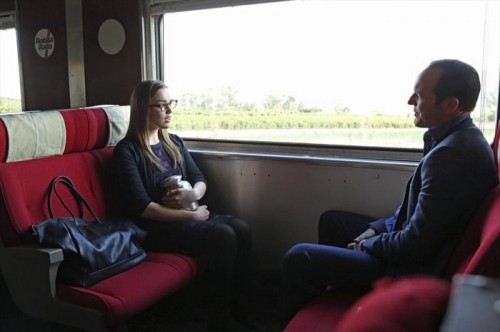 Marvel’s Agents of S.H.I.E.L.D. returns to ABC tonight with a new episode and here’s hoping that, despite taking a short break, they can maintain the momentum that the previous two episodes have been building.

Tonight’s episode finds the team undercover on a train in Italy as they continue their search for Centipede (though, by the looks of the video clip they’ve released, that cover gets blown quickly). We’ll also get to see what Mike Peterson can do now as Deathlok (and whether he is still a good guy or not).

And, the Generalissimo himself, Stan Lee will make his debut on the show in what he calls “a big role” which I am pretty excited about.

There seems to be a lot of things jammed into this episode: action, humor, new characters, cameos but, if the previous episodes are indicative of what’s to come, I can’t wait to watch it. They have also promised us a “series changing” ending, but let’s be honest, that kind of build up is mostly white noise at this point. It may, in fact, be series changing, but that kind of language is being used by most of T.V. these days, so I usually take it with a grain of salt.