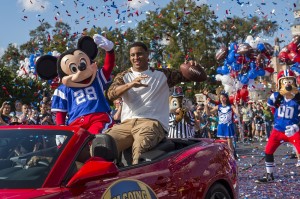 (Feb. 3, 2014): Super Bowl XLVII MVP Malcolm Smith rides Feb. 3, 2014 with Mickey Mouse in a parade through the Magic Kingdom at Walt Disney World Resort in Lake Buena Vista, Fla. Smith, a linebacker for the Seattle Seahawks, helped lead his team to a 43-8 victory last night over the Denver Broncos in East Rutherford, N.J. After the game, Smith became the NFL’s first defensive player to star in the iconic Disney Parks commercial where he proclaimed “I’m Going to Disney World!” (Matt Stroshane, photographer)