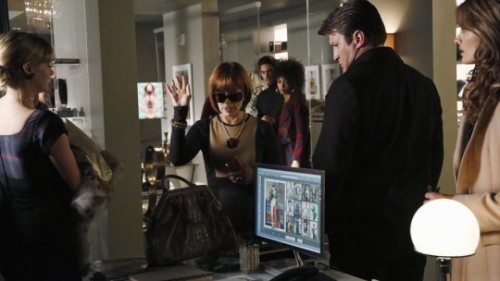 And there was much rejoicing in the Castle fan sphere after the last episode. That’s because the much reviled (and I’m being kind) Pi appears to have been written out of the show. While we didn’t see Alexis officially break up with him, it was pretty clear that’s what she intended to do at the end of the episode.

So, where do we go from here? Why to the fashion world, of course. This isn’t the first time Castle and Beckett have been involved in a murder in the fashion industry, but it’s been a few seasons. Plus this week looks like it will include a bit more about Beckett’s past as a fashion model. Did we know that before? I certainly don’t remember hearing about it, but I don’t remember every detail on this show like I do others I watch since continuity is not as big an issue.

I’m assuming we’ll get an update on Alexis in one form or another. I know Pi isn’t in the show. But then again, this is Castle. We might not see Alexis or get any word from her this week.

There are going to be some developments in the wedding planning front, helped by Beckett’s connection to the case this week.

See you at Carstairs Considers with my recap Tuesday after the episode airs Monday.