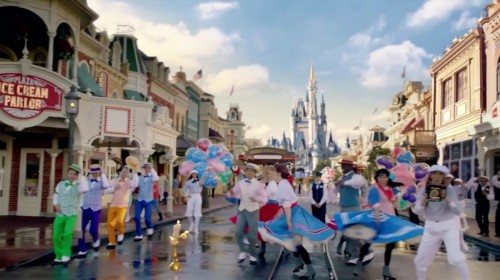 The commercial MyMagic+ I posted last week has been set to private, but Disney has released this new MyMagic+ commercial complete with singing Lumiere to promote the new service.

Keep an eye out around the 0:09 second mark for some really bad photoshoppery of Main Street USA. They’ve placed Cinderella Castle on the wrong end of Main Street. This was originally spotted by Twitter user @PaulChadkin.

This new ad is clearer regarding how this is a test available to only resort guests. That’s good, since the old ad implied that this service was currently available to anyone with the right mobile app and valid theme park admission. However, I have heard growing rumors that select Annual Passholders will shortly be invited test the MagicBands and MyDisneyExperience App for early-bird Fastpass+ reservations. I’ll let you know if I hear anything more firm.

Select Annual Passholders, those who booked themepark hotel stays or had themselves added to friends rooms, already have Magic Bands and can currently make and modify early-bird Fastpass+ reservations via the MyDisneyExperience App or in the parks at Kiosks. Rolling it out all all Annual Passholders sooner rather than later would help alleviate some of the ill-will being generated by the current tiered access and even between family members who have access and those who don’t (humming “two brothers”)…