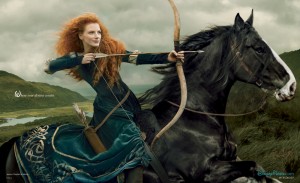 WHERE YOUR DESTINY AWAITS — In a new image by acclaimed photographer Annie Leibovitz unveiled today by Disney Parks, Jessica Chastain stars as the adventurous princess, Merida, from ‘Brave.’ The newest ‘Disney Dream Portrait’ from Leibovitz was commissioned by Disney Parks for their ongoing celebrity advertising campaign which debuted in 2007. The image, which will appear in the February issue of ‘O – The Oprah Magazine,’ is entitled, ‘Where your destiny awaits.’ (Annie Leibovitz for Disney Parks)